Last year during my DTS I felt God tell me that I was going to walk into a “springtime season.”

I was so encouraged by this promise; to walk into a season of new life and growth  having been through a wintery rough few years. I, like many others, came to DTS desperate for a touch from God. I was so broken, and honestly, I knew that by myself I could never escape this brokenness.

During that time God spoke to me the Bible verse Isaiah 43:19,

See, I am doing a new thing!
Now it springs up; do you not perceive it?
I am making a way in the wilderness
and streams in the wasteland.

This verse was a promise that I held onto during that time. I was drawing closer to God, learning to walk with Him, processing the past and learning new things. It was a season where the soil of my heart was churned, old roots pulled from the ground and new seeds planted. It was exciting and painful, yet there was a sense of peace within me as I remembered that it was the preparation and dawning of a season of new life.

As 2020 rolled around and dazzling fireworks welcomed the New Year with great bursts of light, I could feel that something was going to be different.

I had a funny feeling that the long awaited “springtime season” of new life had finally arrived.

In January I came back to YWAM Lausanne on staff after having been away for Christmas break. In the weeks before students arrived we had staff meetings, preparing for the year of missions ahead of us.  We discussed what the New Year held and Markus Steffan, our base leader, announced the theme verse for the first year of this new decade, Isaiah 43:19!

I couldn’t help but grin. It was as if God had just winked at me.

This was such a confirmation of what God had been speaking to me! The little flame of hope in my heart began to grow.

So far, though it is still early on in the year, I have already seen God’s hand at work in my circumstances and relationships. The challenges of the last few years have started to dissolve little by little. I am learning each day that Jesus is right here beside me, walking hand in hand into this new season.

And it’s not just me walking into a new season, it’s YWAM Lausanne and  it’s the global body of Christ. This year,  I am on the edge of my chair watching the new things that God is doing! I have seen the goodness of God in my and my friend’s and family’s lives. An old season passing away and a new one springing forth.

New schools and ministries have been born here at YWAM Lausanne too! For the first time this year  we’re running a DTS in Portuguese, hosting schools in the Mediterranean, running the Discipleship Bible School and starting the Create and Communicate seminar .

Still, I look further  and continue to be amazed. Just thinking about what God did in Brazil during ‘The Send’ conference and what He is about to do in the upcoming conference in Argentina.

On his Facebook page, Andy Byrd, co-author of ‘Fire and Fragrance’ announced that there were “7,847 first time commitments  to salvation or rededication to a fully surrendered life” at ‘The Send’ Brazil. There were also 10,916 commitments by students to reach universities by joining or starting a Christian club, and that’s only the beginning!

Some of my favourite music artists  have come to Christ; political figures also. Many areas of society are seeing a move of God.

I believe that God is doing something new in the earth. That there is a passion for God being fanned into a great flame around the globe and it’s happening from the smallest to the largest scale.

So, how then do we respond to this?

For me I am pursuing God, to truly know His nature and character, and then out of the overflow of my relationship with Him, using the specific gifts that He has given me to serve Him – writing for example.

It starts in a place of trust and relationship with God, and asking Him to reveal the path ahead of you. It’s taking a moment to listen to His voice. What is He speaking to you?

Maybe He asking you to share the Gospel with a friend. Or perhaps to read the Bible more. Is there someone He is putting on your heart to pray for, or a ministry He is asking you to serve in?

You might be surprised at what He speaks to you. It is very possible that it is a brand new thing.

We’re in this together. 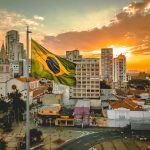 Brazil – a leading nation. What just happened at ‘The Send.’DTS