Do you ever take a moment to think about God’s presence? Where it is and how we get it? Sometimes we pray to have more of it, but what are we actually praying for? Because I don’t think the problem lies in whether or not God is present to us as much as it’s in whether or not we are present to Him. To those who follow Him, Jesus said He would be with us always, even to the end of the world. And God said in Hebrews that He would never leave us or forsake us.

In the Community Development School this quarter, we spent a few days talking about the community of believers, God’s presence in us as a community, and His presence in us individually. When we gather as a community of Jesus-followers, whether it’s a Sunday service, a small group throughout the week, or a meal at a brother or sister’s house, it’s Jesus who is our Host. It’s because of Him we gather and in Him we have unity. Once we head back to our homes and invite other’s in, we become the hosts. We create an atmosphere, a palpable change once someone walks through our door, that shows our home is filled with God’s presence. But when we go out into the world, to restaurants or coffeeshops or stores, we’re no longer hosts. What we are, however, is ambassadors of Jesus. Through the Holy Spirit, we hold God’s presence within us, and we have the opportunity to welcome other people, people who don’t know Jesus, into that presence.

Every Wednesday here at YWAM Lausanne, both students and staff head down to the center of Lausanne to spread the good news. As we discussed the concept of God’s presence in class, I began thinking about it in the context of Wednesday afternoons. Thinking about it in this way made it seem so much clearer. My role in the city is to take God’s presence and welcome those around me into it. What a beautiful concept of gospel hospitality!

But, if I’m honest, the acting out of this amazing thought was easier said than done. As we headed into the city this last Wednesday, I was reluctant to step out. Do I really need to walk up to strangers and start talking to them? What if they don’t speak English? What if they’re annoyed by me? What if it’s extremely awkward and uncomfortable? I spent the first hour of our time there with a couple classmates, wandering the city and talking, thinking about talking to people but not acting on it. We all liked the idea of inviting someone into God’s presence, but when push came to shove, we were definitely dragging our feet a bit.
But who ever said it was going to be easy anyways? Who said everyone would love us? And who ever said everything in life would be comfortable? Well, I’ll tell you this: Jesus certainly didn’t! With just forty-five minutes of our time in Lausanne left, we realized we had to do something. It was time to act. We paused, prayed quickly, and continued on slowly, looking for someone that seemed at least somewhat approachable. Frankly, we almost gave up and did nothing.

After about 15 minutes of slow walking and indecisiveness, I gulped down my personal fears of rejection, of discomfort, of awkwardness and finally did it. I marched up to a lady taking a break on some church steps and hesitantly asked, “Parlez vous anglais?” That is, “Do you speak English?”

And guess what? Not only did she speak amazing English, but she had the same name as me, had lived in my home state in America for seven years, had just returned from a trip in NYC where I had also lived for two years, had a son in the school across from ours, had travelled in the country I’m planning on moving to, and runs a business as I plan to do!

Whew! Was God cool or what? What an arrangement! We were so scared to make the first move, yet as soon as we did, He had made it so easy on us!

If you’re expecting a miraculous story of salvation or healing, I’ll warn you now, that’s not where this is headed. What this is, however, is a story of simple obedience, first steps of courage, and God’s presence. The three of us stayed in town an extra hour that Wednesday to have coffee with this lady. We heard about where she grew up, her family, her sister’s troubles, her business. We received business advice, her phone number to stay in contact, and an invitation to stay with her in Bombay. We got to share with her just a bit about God’s intentions for the world; and we were able to pray for her, her sister, and her son.

I don’t know what will come of this small encounter, but I do know that we had the joy of inviting someone into God’s presence for an hour and a half that Wednesday evening. We have no way of knowing what encounters she’s had with God prior to us or what will happen after us, but perhaps we are just a tiny part of a big story of redemption where one day, she will be a Jesus-follower, a presence-carrier, too.

So, first of all, is God present in you? If He is, how often are you aware of it? Are you present to Him? And how often are you obeying Him and inviting others into that presence? It’s not always easy, and I can guarantee that you will, at times, face rejection or uncomfortable situations. But all God wants is obedience out of love – obedience in sharing His presence to anyone and everyone. He’s a God of hospitality, welcoming people of every age, every culture, every class into His presence to be loved, redeemed, and changed by Him, and as His ambassadors, let’s be welcoming too!

Rachel, from the USA, completed her DTS here at YWAM Lausanne, and is now studying our Community Development School. 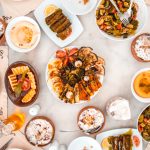 The Power of FoodDTS, Stories